Major League Baseball (MLB), the Miami Marlins, Budweiser and TEAM Coalition joined forces to encourage fans to be responsible and respect others while attending MLB All-Star activities July 7-11, 2017. Through the Budweiser Good Sport program, safe-ride home options and the Responsibility Has Its Rewards sweepstakes for designated drivers, more than 8,175 baseball fans of legal drinking age pledged to make it home safely. 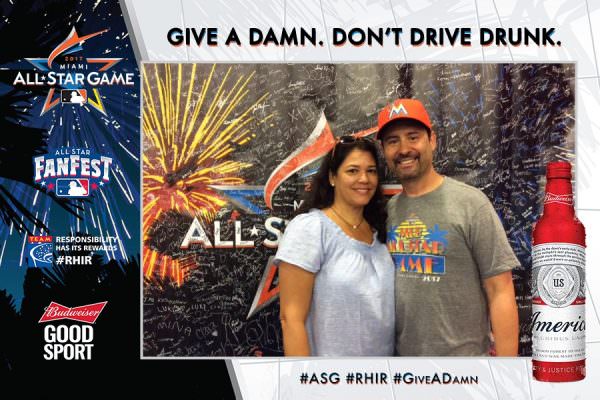 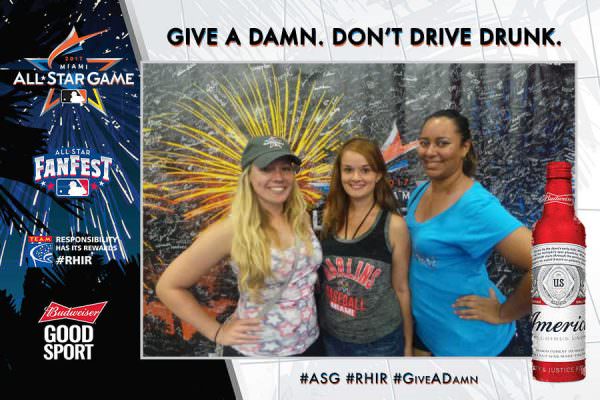 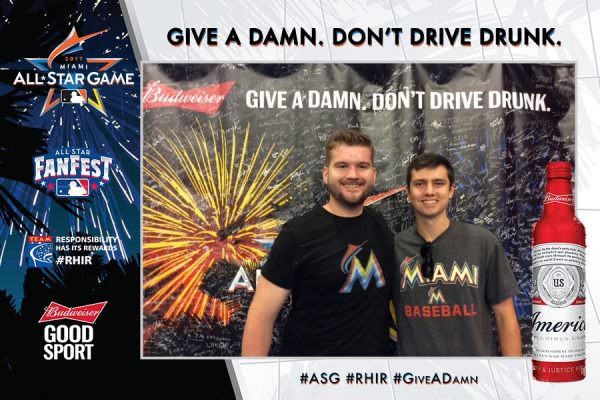 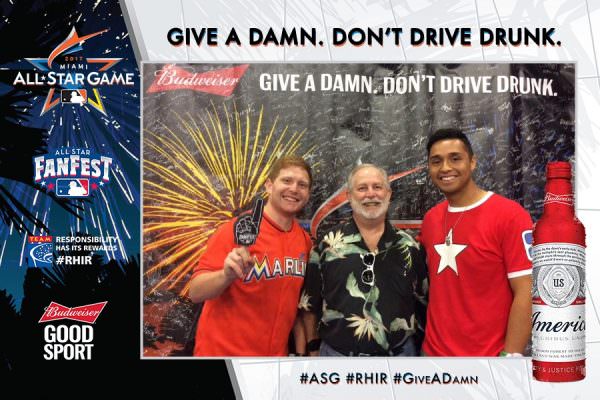 Budweiser Good Sport is an in-stadium designated driver program that promotes responsible consumption and safe transportation among adult sports fans. Anheuser-Busch founded the program in 1986, and there are now 105 professional sports teams and venues participating each year.

Responsibility Has Its Rewards is an MLB league-wide sweepstakes which rewards one randomly–selected fan who pledged to be a designated driver with a trip to the All-Star Game presented by MasterCard. This year’s winner was Matt Terry, a responsible fan from West Bloomfield, Michigan who attended the Gatorade All-Star Workout Day, featuring T-Mobile Home Run Derby, and the 88th Midsummer Classic with his guest. Matt was recognized on the Marlins Park video board at the All-Star Game, serving as a representative of the nearly 585,000 MLB fans who pledged to be designated drivers last season.

Stop by our booth at Fan Fest to show you drink responsibly and win prizes! #Budweiser #GiveADamn #AllStarGame

821 fans visited the Budweiser Good Sport designated driver sign-up location inside Marlins Park during this weekend’s festivities, where they took the pledge to drink responsibly and were rewarded with a soft drink coupon. 6,154 fans who visited MLB All-Star FanFest at the Miami Beach Convention Center pledged to be responsible, spun the “Give a Damn” prize wheel, added their autographs to a wall of signatures of responsible fans and received a souvenir photo displaying the responsibility message along with All-Star images. Each day one lucky and responsible fan received an All-Star Game jersey. Another 1,200 baseball fans in the Miami area made the responsible choice by taking advantage of a safe transportation option provided by Budweiser.

For the 14th consecutive season, MLB, Techniques for Effective Alcohol Management (TEAM) Coalition and Budweiser have joined together to make fans aware of the designated driver programs offered at MLB ballparks. The designated driver programs and the “Responsibility Has Its Rewards” sweepstakes promote safer roads by encouraging responsible drinking and positive fan behavior.

Anheuser-Busch and its wholesalers promote responsible drinking among baseball fans by implementing Budweiser Good Sport fan responsibility programs with 21 MLB ballparks throughout the season. Anheuser-Busch is an official sponsor of Major League Baseball.

The safety of our fans is a serious focus all season long and the Budweiser Good Sport Program helps us increase fans’ social responsibility at and around our ballparks. Along with Budweiser and TEAM Coalition, we are proud to reward some of the fans who have vowed to make sure their family, friends and fellow fans arrive home safely. I am sure they will enjoy this special All-Star experience.John Skinner, Director of Security & Facility Management, Major League Baseball
Budweiser continues to take great pride in promoting responsible drinking, as we have done for more than 35 years, and the Budweiser Good Sport program is a great way to remind fans to  enjoy responsibly and get their friends home safely. We all share the same streets after the game. This partnership with Major League Baseball, TEAM and the fans displays our collective responsibility to help keep our roads safe.Katja Zastrow, Vice President, CSR-Better World U.S., Anheuser-Busch
The success of the Responsibility Has Its Rewards campaign with Major League Baseball and Budweiser is a direct result of the commitment from the League, the MLB Clubs and all the campaign partners. Teamwork is what this campaign is all about. It is proof that when everyone – including the fans – takes responsibility, everyone wins.Jill Pepper, Executive Director, TEAM Coalition
Major League Baseball
Major League Baseball (MLB) is the most historic professional sports league in the United States and consists of 30 member clubs in the U.S. and Canada, representing the highest level of professional baseball. Major League Baseball is the best-attended sport in North America, and since 2004, MLB has enjoyed its best-attended seasons in the history of the game, with each regular season eclipsing the 73 million mark. Led by Commissioner Robert D. Manfred, Jr., MLB currently features record levels of labor peace, competitive balance and industry revenues, as well as the most comprehensive drug-testing program in American professional sports. MLB remains committed to making an impact in the communities of the U.S., Canada and throughout the world, perpetuating the sport’s larger role in society and permeating every facet of baseball’s business, marketing and community relations endeavors. With the continued success of MLB Advanced Media and MLB Network, MLB continues to find innovative ways for its fans to enjoy America’s National Pastime and a truly global game. For more information on Major League Baseball, visit www.MLB.com.
Anheuser-Busch
Anheuser-Busch and its employees build on a legacy of corporate social responsibility by focusing on three key areas: promoting alcohol responsibility, preserving and protecting the environment and supporting local communities. In the past three decades, Anheuser-Busch and its wholesalers have invested more than $1 billion in preventing drunk driving and underage drinking and promoting responsible retailing and advertising. Anheuser-Busch reduced total water use at its breweries by nearly 50 percent over the last 10 years. The company has been a leading aluminum recycler for more than 30 years. Each year Anheuser-Busch and its Foundation invest approximately $20 million in donations to charitable organizations that help in local communities. The company also has provided over 76 million cans of emergency drinking water to people impacted by natural and other disasters since 1988. Based in St. Louis, Anheuser-Busch, the leading American brewer, is a wholly-owned subsidiary of Anheuser-Busch InBev, the leading global brewer. For more information, visit www.anheuser-busch.com.
TEAM Coalition
TEAM Coalition is an alliance of professional and collegiate sports, entertainment facilities, concessionaires, stadium service providers, the beer industry, distillers, broadcasters, traffic safety experts and others working together to promote responsible drinking and positive fan behavior at sports and entertainment facilities. TEAM Coalition members and supporters include Major League Baseball, Anheuser-Busch Companies, Major League Soccer, NASCAR, National Basketball Association, National Football League, National Hockey League, National Collegiate Athletic Association, Americrown, Aramark, Delaware North Sportservice, Legends, Spectra, Beer Institute, National Beer Wholesalers Association, Constellation Brands, HEINEKEN USA, MillerCoors, Brown-Forman, Live Nation, National Association of Broadcasters, Contemporary Services Corporation, International Association of Venue Managers, Stadium Managers Association and the National Highway Traffic Safety Administration.  For more information, visit TEAMCoalition.org.