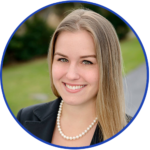 Since joining the Better World team at A-B, I’ve heard story after story from our employees and wholesaler network about the fantastic opportunities and experiences they have promoting responsibility on the ground at sporting events with TEAM. Whether its at a NASCAR track or the Superbowl, its incredibly clear how valued the TEAM relationship is to the entire A-B family in demonstrating our strong commitment to responsible drinking!

During my time at Anheuser-Busch, I’ve held roles in both the Marketing and Corporate Affairs functions and had the opportunity to lead impactful campaign launches and develop and bring new innovations to the market.

Prior to joining Anheuser Busch, I completed my MBA at the Tuck School of Business at Dartmouth where much of my formal study focused on the field of Marketing. Prior to business school, I was based in Shanghai, China, where I worked in  Marketing and Communications roles for organizations including the American Chamber of Commerce and Weber Shandwick. I believe that my unique set of professional experiences and skills paired with my work ethic and commitment to promoting responsible drinking would serve me well in this position.