Glendale, AZ. (2/1/2015) – TEAM Coalition proudly joined forces with the National Football League and Bud Light in support of the national Responsibility Has Its Rewards (RHIR) campaign at the 2015 Pro Bowl®, NFL Experience and Super Bowl XLIX® in Glendale, AZ. Throughout the 2014 NFL season, each NFL team offered fans the opportunity to pledge to be a designated driver at every home game during the preseason, regular season and postseason. At the end of the regular season, each NFL team selected one fan to be the Designated Driver For the 2014 Season.

More than 270,000 fans across the league participated in this life-saving program this year. The Designated Drivers for the Season for the New England Patriots – Ray Martel – and the Seattle Seahawks – Trish Varrelman – attended Super Bowl XLIX compliments of TEAM Coalition and the NFL as the RHIR sweepstakes grand prize winners.

At University of Phoenix Stadium, 1,734 NFL fans pledged to “Stay in the Game” by promising to be a designated driver for their group. Two lucky winners will be recognized as the Designated Drivers of the Game for Super Bowl XLIX, receiving prize packs containing Super Bowl branded items, along with Bud Light and TEAM Coalition items.

One week prior, during the 2015 Pro Bowl at University of Phoenix Stadium, 910 NFL fans pledged to be a designated driver. One lucky fan will be recognized as the Designated Driver for the Game for the 2015 Pro Bowl and will also receive a prize pack containing Pro Bowl, Bud Light and TEAM items. In addition, the first prize in the RHIR sweepstakes – a trip to the Pro Bowl – was awarded to the Designated Driver for the Season from the St. Louis Rams, Kyle Wootten. 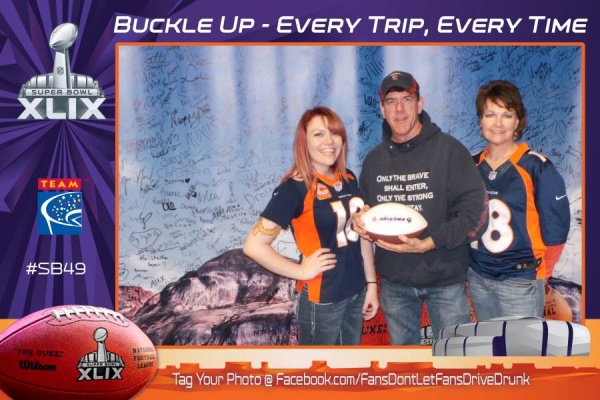 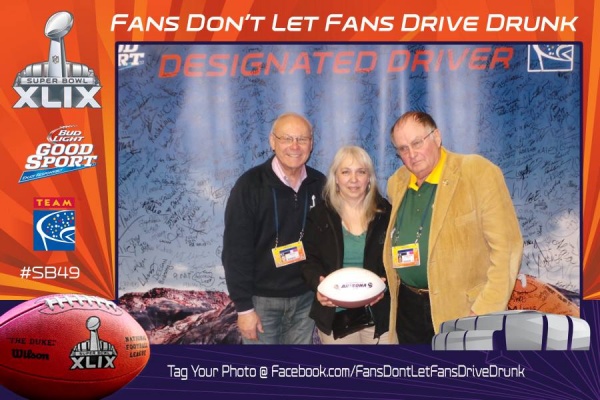 CLICK HERE TO SEE ALL OF THE FAN PHOTOS ON FACEBOOK!
Throughout the week in Phoenix, TEAM Coalition and Bud Light partnered to share the responsibility message with fans at the NFL Experience held downtown at the Phoenix Convention Center. Fans who took the pledge to never drive drunk, always have a desiganted driver, never provide alcohol to anyone under the age of 21 and buckle up every trip, every time were rewarded with a free souvenir photo and giveaways. Over 3,000 attendees made the pledge to be a responsible NFL fan!
The positive contributions made by TEAM are far reaching. Its mission is important to fans and spectators in stadiums, but its message also contributes to responsible conduct in our communities at large. The NFL strongly supports the TEAM program, and we are proud to be a member of the TEAM Coalition.Roger Goodell, Commissioner, National Football League
Anheuser-Busch has led our industry in promoting responsible drinking for more than 30 years and Bud Light Good Sport is one of our most visible programs, which reminds fans who choose to drink, to do so responsibly and get their friends home safely. We all share the same streets after the game. This partnership with the National Football League, participating stadiums, concessionaires, TEAM Coalition and football fans displays our commitment to keeping our roads safe.Bill Bradley, Senior Director, Corporate Social Responsibility Advertising and Outreach, Anheuser-Busch
National Football League
For more information, see http://www.nfl.com/
Anheuser-Busch
For more than three decades, Anheuser-Busch and its nationwide network of wholesalers have invested more than $1 billion in national advertising campaigns and community-based programs to promote responsible drinking, prevent underage drinking and drunk driving and address college issues. For more information on these alcohol responsibility efforts and the progress being made, visit www.Anheuser-Busch.com
TEAM Coalition
TEAM Coalition is an alliance of professional and collegiate sports, entertainment facilities, concessionaires, stadium service providers, the beer industry, distillers, broadcasters, traffic safety experts and others working together to promote responsible drinking and positive fan behavior at sports and entertainment facilities. TEAM Coalition members and supporters include National Football League, Major League Baseball, Major League Soccer, NASCAR, National Basketball Association, National Hockey League, National Collegiate Athletic Association, Americrown, Aramark, Delaware North Sportservice, Legends, Spectra, Beer Institute, National Beer Wholesalers Association, Anheuser-Busch Companies, Constellation Brands, HEINEKEN USA, MillerCoors, Brown-Forman, Live Nation, National Association of Broadcasters, Contemporary Services Corporation, International Association of Venue Managers, Stadium Managers Association and the National Highway Traffic Safety Administration. For more information visit www.TEAMCoalition.org or www.FansDontLetFansDriveDrunk.org.