TEAM Coalition proudly joined forces with the National Football League and Bud Light in support of the national Responsibility Has Its Rewards (RHIR) campaign at the 2016 Pro Bowl in Honolulu, Hawaii on Sunday January 31, 2016 and Super Bowl 50 in Santa Clara, CA on Sunday February 7, 2016. Throughout the 2015 NFL season, each NFL team offered fans the opportunity to pledge to be a designated driver. At the end of the regular season, each NFL team selected one fan to be the Designated Driver for the 2015 Season.

More than 264,000 fans across the league participated in this life-saving program during the 2015 regular season. The Designated Drivers for the Season for the Denver Broncos – Colleen Eastman– and the Carolina Panthers – Frank Jetton – attended Super Bowl 50 compliments of TEAM Coalition and the NFL as the grand prize winners of the Responsibility Has Its Rewards sweepstakes.

At Levi’s Stadium, 559 NFL fans pledged to be “Good Sports” – designated drivers. Designated Drivers are over 21 years of age, and they promised not to drink alcohol and provide safe transportation home for their group after the game. All “Good Sports” who took the pledge were entered in a drawing to win a prize pack. Four lucky winners were recognized as Good Sports of the Game for Super Bowl 50. Each received a prize pack containing Super Bowl branded items, along with Bud Light and TEAM Coalition items.

Nearly 1,000 fans pledged to never drive drunk at the NFL Experience offered for nine days leading up to Super Bowl 50. 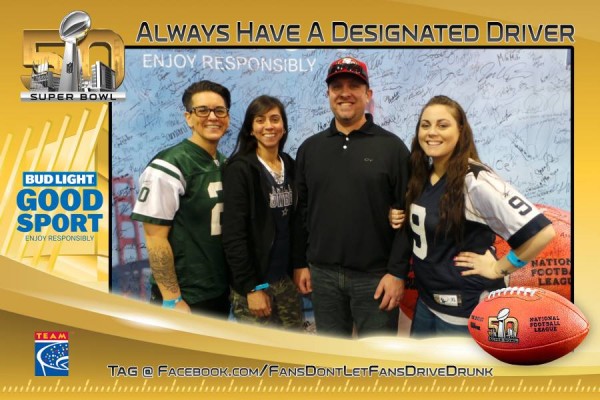 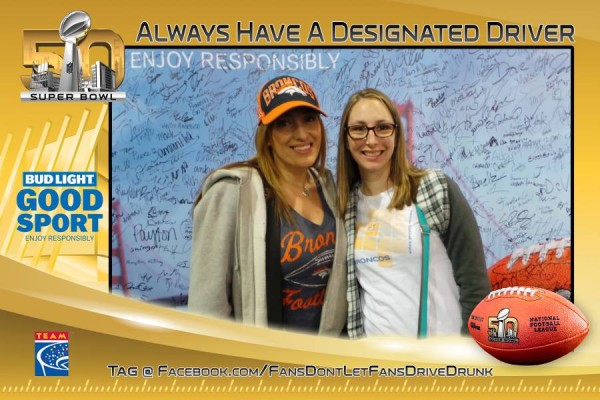 The first prize was awarded to the Designated Driver for the Season from the Philadelphia Eagles –Rebecca Grisillo. Ms. Grisillo received a trip to the 2016 Pro Bowl in Honolulu, HI.

“Fans who pledge to be designated drivers are critical to the success of the Responsibility Has Its Rewards campaign,” said Jill Pepper, executive director of TEAM Coalition. “Teamwork is exactly what this campaign is all about. Through this program, we are demonstrating that when everyone – including the fans – takes responsibility, everyone wins.”

“Anheuser-Busch has led our industry in promoting responsible drinking for more than 30 years. Bud Light Good Sport, is one of our most visible programs, which reminds fans who choose to drink, to do so responsibly and get their friends home safely,” said Bill Bradley, Vice President of Community Affairs at Anheuser-Busch. “We all share the same streets after the game. This partnership with the National Football League, participating stadiums, concessionaires, TEAM Coalition and football fans displays our collective responsibility to help keep our roads safe.”

“The positive contributions made by TEAM are far reaching. Its mission is important to fans and spectators in stadiums, but its message also contributes to responsible conduct in our communities at large. The NFL strongly supports the TEAM program, and we are proud to be a member of the TEAM Coalition,” said Roger Goodell, Commissioner of the National Football League.