The penultimate race of the 2016 NASCAR season was contested at the Can-Am 500 at Phoenix Raceway on November 13, 2016, and fans at the track were given the opportunity to earn valuable rewards by taking the Busch Good Sport pledge. The race marks the fourth time Phoenix Raceway, Anheuser-Busch, Hensley Beverage Company, Americrown and TEAM Coalition have partnered to promote responsible drinking and traffic safety. 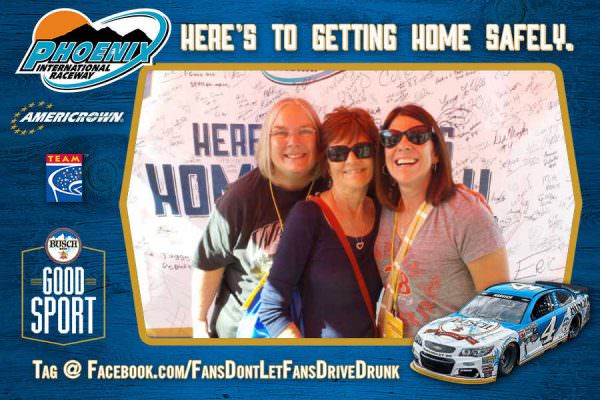 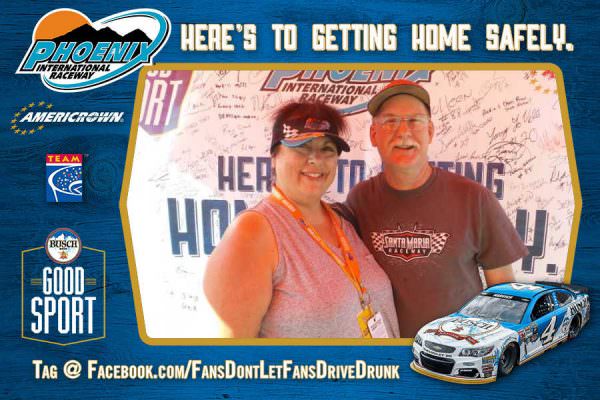 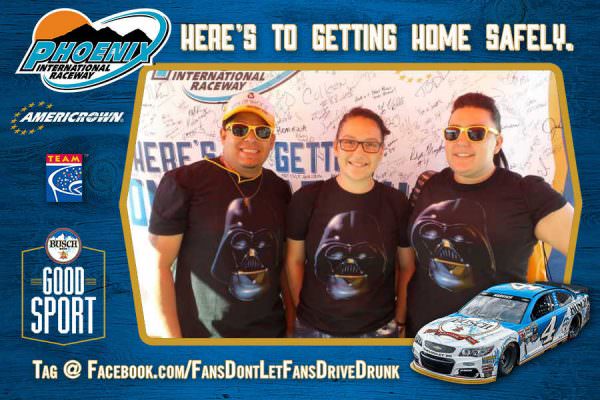 Before the race, 233 fans made the pledge to be the designated driver for their group. All of them had the opportunity to receive a free souvenir photo, instant prizes, and a chance to be selected as the Designated Driver for the Race. One randomly selected, responsible fan will win the “Responsibility Has Its Rewards sweepstakes.” The grand prize includes two tickets and a VIP experience for two at the Camping World 500 at Phoenix Raceway on March 19, 2017.

The Designated Driver for the Race from the 2016 Good Sam 500, Cheri Preas, received a pair of tickets and a behind-the-scenes experience for herself and a guest before the Can-Am 500.

While we want every fan that comes to Phoenix Raceway to enjoy everything about their race experience as much as possible, safety is always the top priority. With that in mind, we commend the fans that chose to serve as designated drivers for their family or friends during race weekend.Bryan R. Sperber, President, Phoenix Raceway
Anheuser-Busch has led our industry in promoting responsible drinking for more than 30 years and the Busch designated driver program reminds fans who choose to drink, to do so responsibly and get their friends home safely. We all share the same streets after the race. This partnership with Phoenix Raceway, TEAM and the fans displays our collective responsibility to help keep our roads safe.Katja Zastrow, VP of CSR-Better World, Anheuser-Busch
Americrown believes responsible alcohol consumption improves the fan experience at events. As a proud member of the TEAM Coalition, we use proven training tools to educate our service staff as well as our partners in venue management.  Each day, we pledge to operate with the highest integrity for the benefit of all stakeholders.Rishi Nigam, Vice President, Americrown
The success of the Responsibility Has Its Rewards campaign is a direct result of the commitment from our members and all the designated driver program partners, including the tracks, concessionaires, beer companies and beer distributors. Teamwork is what this campaign is all about. We are demonstrating that when everyone – including the fans – takes responsibility, everyone wins.Jill Pepper, Executive Director, TEAM Coalition
Phoenix International Raceway
Since 1964, Phoenix International Raceway has been the premier motorsports venue in the Southwest. Founded as an open-wheel racing mecca, PIR was proud to host the Desert Diamond West Valley Phoenix Grand Prix Verizon IndyCar Series race under the lights in April. Phoenix is the only track in the West to feature two NASCAR Sprint Cup Series weekends a year, beginning with the Good Sam 500 race weekend in March. The schedule is anchored by the upcoming Can-Am 500 race weekend on Nov. 11-13, the semifinal race in the Chase for the NASCAR Sprint Cup after which the field will be reduced to the final four championship contenders.
Anheuser-Busch
Anheuser-Busch and its employees build on a legacy of corporate social responsibility by focusing on three key areas: promoting alcohol responsibility, preserving and protecting the environment and supporting local communities. In the past three decades, Anheuser-Busch and its wholesalers have invested more than $1 billion in national advertising campaigns and community-based programs to encourage responsible drinking and prevent underage drinking and drunk driving. Anheuser-Busch reduced total water use at its breweries 15 percent over the last 5 years and by 48 percent over the last 10 years. The company has been a leading aluminum recycler for more than 30 years. Since 1997, Anheuser-Busch and its Foundation have invested in local communities through donations of more than $573 million to charitable organizations. The company also has provided more than 73.6 million cans of emergency drinking water to people impacted by natural and other disasters since 1988. Based in St. Louis, Anheuser-Busch, the leading American brewer, is a wholly-owned subsidiary of Anheuser-Busch InBev, the leading global brewer. For more information, visit www.anheuser-busch.com.
Americrown
Americrown, originally formed in 1989 by Lesa France Kennedy, Chief Executive Officer of International Speedway Corporation, is the leader in motorsports catering and concessions. Operating at 11 NASCAR-sanctioned tracks nationwide, Americrown touches millions of race fans annually. Our ever growing fleet of mobile food concessions and catering equipment is unparalleled in the industry. Anywhere, anytime. If you can dream it, we can do it!