Toronto, ON – Toronto Raptors fan Ali Mohsenian was uniquely excited for Game 1 of the NBA Finals 2019 presented by YouTube TV last night. Mr. Mohsenian was named “Designated Driver for the Season” for the Raptors and attended Game 1 as a grand prize winner of the “Responsibility Has Its Rewards” sweepstakes. Mohsenian and his guest enjoyed the experience of a lifetime by simply having a plan to get home safely.

Before tip-off, nearly 200 responsible Raptors fans showed their support for the Raptors and drunk driving prevention by autographing the responsibility wall and smiling for a souvenir photo. 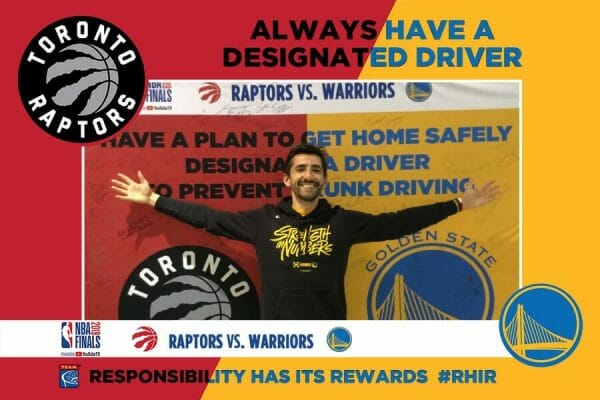 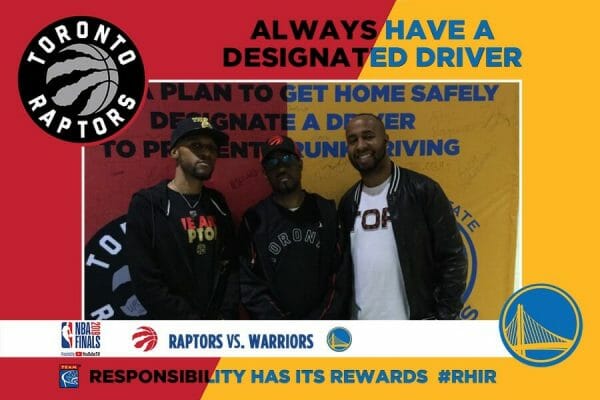 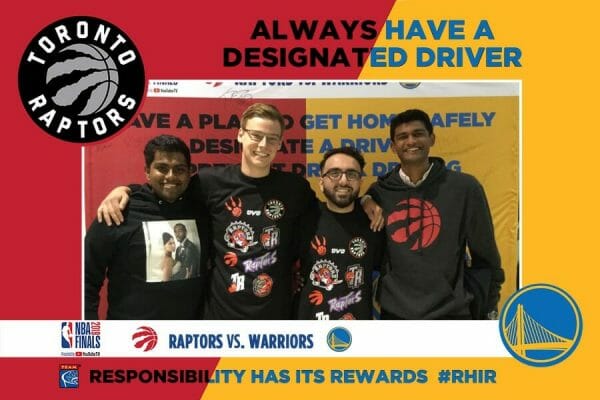 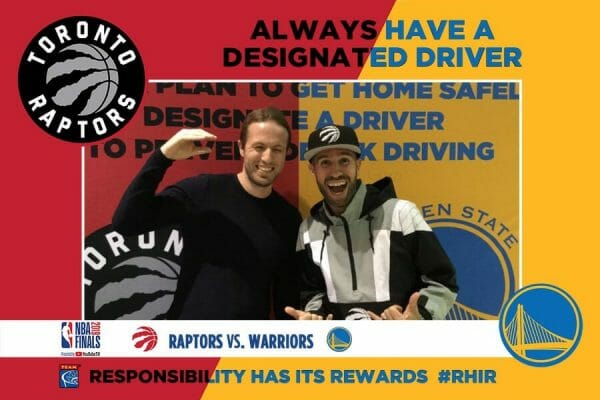 Flavia Hsiung was named “Designated Driver for the Season” for the Golden State Warriors and will attend Game 3 of the NBA Finals as the other grand prize winner of the sweepstakes.

Both winners were randomly selected among all fans who pledged to be designated drivers at Raptors and Warriors home games.  Designated drivers pledge to refrain from drinking alcohol and provide their friends and family with a safe ride home.

Throughout the season, the NBA, Techniques for Effective Alcohol Management (TEAM) Coalition, Budweiser, Jack Daniel’s and NBA teams across the country  worked together to make more fans aware of the designated driver programs at NBA arenas, encourage responsible drinking, positive fan behavior and promote traffic safety.  The success of those efforts is demonstrated by the fact that more than 60,000 NBA fans pledged to be responsible when it comes to alcohol during the 2018-2019 NBA season.

The success of the ‘Responsibility Has Its Rewards’ campaign with the NBA this season is a direct result of the commitment from the league, the teams and all the campaign partners. Teamwork is what this campaign is all about. We are demonstrating that when everyone – including the fans – takes responsibility, everyone wins.Jill Pepper, Executive Director, TEAM Coalition
TEAM Coalition
TEAM Coalition is an alliance of professional and collegiate sports, entertainment facilities, concessionaires, stadium service providers, the beer industry, distillers, broadcasters, traffic safety experts and others working together to promote responsible drinking and positive fan behavior at sports and entertainment facilities. TEAM Coalition members and supporters include the National Basketball Association, Anheuser-Busch Companies, Brown-Forman, Major League Baseball, Major League Soccer, NASCAR, National Football League, National Hockey League, National Collegiate Athletic Association, Americrown, Aramark, Delaware North Sportservice, Legends, Spectra, Beer Institute, National Beer Wholesalers Association, Constellation Brands, MillerCoors, Live Nation, Lyft, National Association of Broadcasters, International Association of Venue Managers, Stadium Managers Association and the National Highway Traffic Safety Administration. For more information visit TEAMCoalition.org or FansDontLetFansDriveDrunk.org.