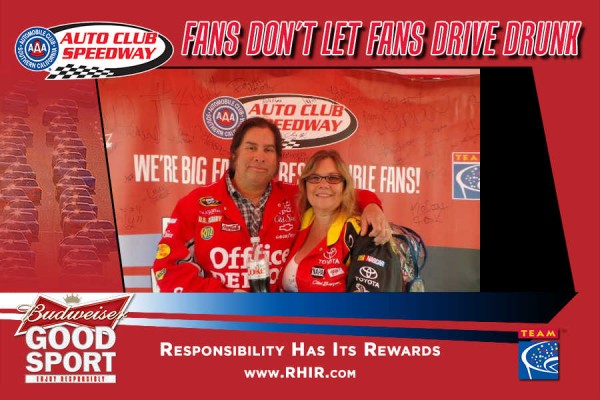 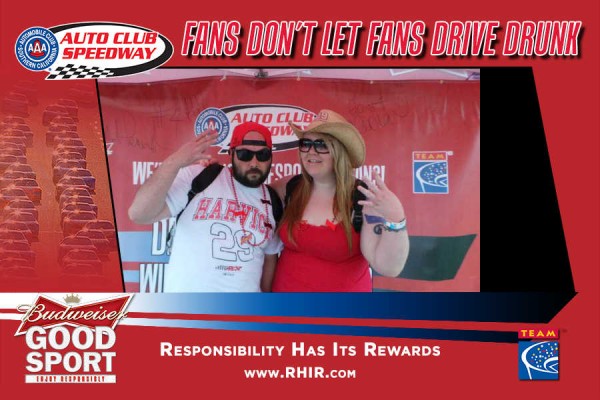 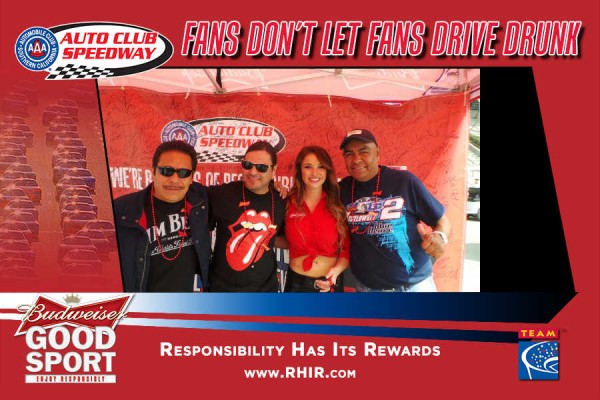 266 fans made the pledge to be a designated driver for their group. Fans who pledged received a free souvenir photo, instant prizes and a chance to be selected as the Designated Driver for the Race. One randomly selected, responsible fan will win the Responsibility Has Its Rewards sweepstakes. The grand prize includes two tickets and two VIP experiences to the next NASCAR Sprint Cup Series race at Auto Club Speedway.

The Designated Driver for the Race from the 2014 Auto Club 400, Yvonne Guerra, received two tickets and two VIP Experiences to the Auto Club 400. Guerra and her guest enjoyed a behind-the-scenes experience before the race on Sunday.

Coming to Auto Club Speedway is all about having a great time, and we want all of our fans to be safe both at the race and on the way home. We applaud these fans that made the responsible choice to be designated drivers for their friends or family this past weekend.Dave Allen, President, Auto Club Speedway
Anheuser-Busch has led our industry in promoting responsible drinking for more than 30 years and Bud Light Good Sport is one of our most visible programs, which reminds fans who choose to drink, to do so responsibly and get their friends home safely. We all share the same streets after the race. This partnership with Auto Club Speedway, TEAM Coalition and race fans displays our commitment to keeping our roads safe.Bill Bradley, Senior Director, Corporate Social Responsibility Advertising and Outreach, Anheuser-Busch
The success of the Responsibility Has Its Rewards campaign is a direct result of the commitment from our members and all the designated-driver program partners, including the tracks, beer companies and state offices of highway safety. Teamwork is what this campaign is all about. We are demonstrating that when everyone – including the fans – takes responsibility, everyone wins.Jill Pepper, Executive Director, TEAM Coalition
Auto Club Speedway
Located 50 miles east of Los Angeles in Fontana, California, Auto Club Speedway is California’s premier motorsports facility, hosting over 320 days of track activity each year including the NASCAR Sprint Cup Series Auto Club 400 weekend, March 20-22 and INDYCAR’s MAVTV 500, June 26-27. The two-mile D-shaped oval is one of the fastest tracks on the INDYCAR and NASCAR circuits. The Speedway is also home to numerous movies, television and commercial productions, photo shoots, new car testing, club racing and a variety of racing schools. For more information on events at Auto Club Speedway call 1-800-944-RACE (7223) or visit www.autoclubspeedway.com . For more information on event lodging, visit the Hilton Garden Inn, Fontana, the official hotel partner of Auto Club Speedway and Auto Club Dragway.
Anheuser-Busch
For more than three decades, Anheuser-Busch and its nationwide network of wholesalers have invested more than $1 billion in national advertising campaigns and community-based programs to promote responsible drinking, prevent underage drinking and drunk driving and address college issues. For more information on these alcohol responsibility efforts and the progress being made, visit www.Anheuser-Busch.com
TEAM Coalition
TEAM Coalition is an alliance of professional and collegiate sports, entertainment facilities, concessionaires, stadium service providers, the beer industry, distillers, broadcasters, traffic safety experts and others working together to promote responsible drinking and positive fan behavior at sports and entertainment facilities. TEAM Coalition members and supporters include National Football League, Major League Baseball, Major League Soccer, NASCAR, National Basketball Association, National Hockey League, National Collegiate Athletic Association, Aramark, Delaware North Sportservice, Legends, Spectra, Beer Institute, National Beer Wholesalers Association, Anheuser-Busch Companies, HEINEKEN USA, MillerCoors, Brown-Forman, Live Nation, National Association of Broadcasters, Contemporary Services Corporation, Elite, International Association of Venue Managers, Stadium Managers Association and the National Highway Traffic Safety Administration. For more information visit www.TEAMCoalition.org or www.FansDontLetFansDriveDrunk.org.