As the 2017 NASCAR Playoffs came to its exciting conclusion, Anheuser-Busch, Eagle Brands, Americrown and TEAM Coalition partnered once again to reward responsible fans during Ford Championship Weekend at Homestead-Miami Speedway.

Before Martin Truex Jr. crossed the finish line first and became the NASCAR Monster Energy Cup Series champion for the first time in his career, 613 fans made the pledge to be responsible at the Ford EcoBoost 300 on Saturday, November 18, 2017 and the Ford EcoBoost 400 on Sunday, November 19, 2017. Those responsible fans promised to never drive drunk and always have a designated driver. All of them had the opportunity to receive a free souvenir photo, instant prizes, and a chance to be selected as the Designated Driver for the Race. One randomly selected, responsible fan will win the “Responsibility Has Its Rewards” sweepstakes grand prize, which includes two tickets and a VIP experience for two at next year’s Ford EcoBoost 400 at Homestead-Miami Speedway, which will be held November 18, 2018. 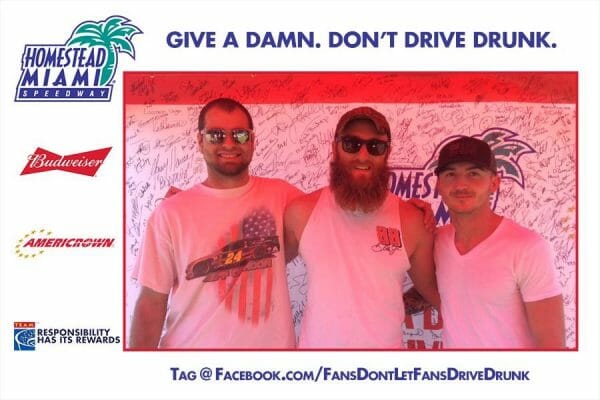 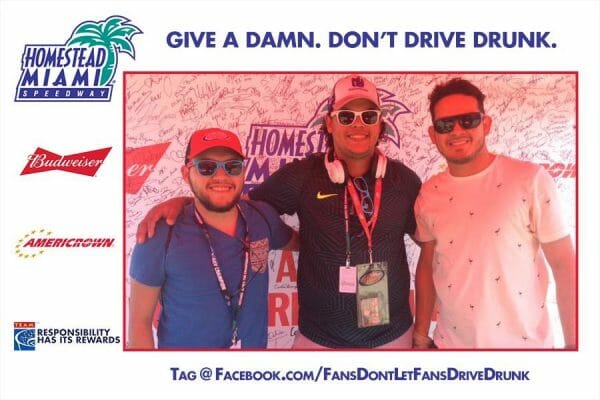 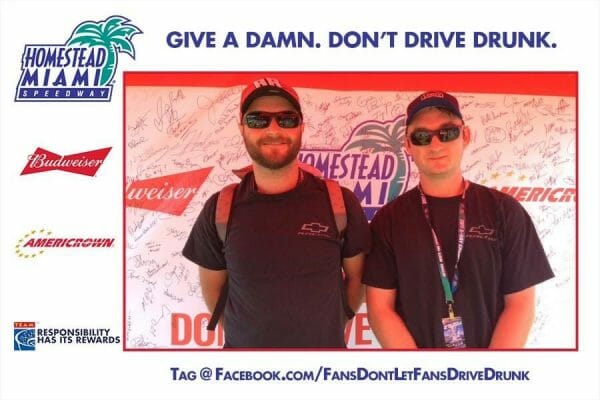 The Designated Driver for the Race from last season, Kevin Quesada, received a pair of tickets and a behind-the-scenes experience for himself and a guest before the Ford EcoBoost 400.

Anheuser-Busch has led our industry in promoting responsible drinking for more than 30 years and the designated driver program reminds fans who choose to drink, to do so responsibly and get their friends home safely. We all share the same streets after the race. This partnership with Homestead-Miami Speedway, TEAM and the fans displays our collective responsibility to help keep our roads safe.Katja Zastrow, VP of CSR-Better World, Anheuser-Busch
Americrown believes responsible alcohol consumption improves the fan experience at events. As a proud member of the TEAM Coalition, we use proven training tools to educate our service staff as well as our partners in venue management.  Each day, we pledge to operate with the highest integrity for the benefit of all stakeholders.Rishi Nigam, Vice President, Americrown
The success of the Responsibility Has Its Rewards campaign is a direct result of the commitment from our members and all the designated driver program partners, including the tracks, concessionaires, beer companies and beer distributors. Teamwork is what this campaign is all about. We are demonstrating that when everyone – including the fans – takes responsibility, everyone wins.Jill Pepper, Executive Director, TEAM Coalition
Homestead-Miami Speedway
The Speedway has been open since 1995 following an initiative to spur economic recovery in the aftermath of Hurricane Andrew. NASCAR has crowned its champions in all three of its premier series at Homestead-Miami Speedway for 15 consecutive years (2002-16) at Ford Championship Weekend.

The track, which celebrated its 20th anniversary in 2015, is a 650-acre facility that is active nearly 300 days per year, and features a 1.5-mile oval and 2.21-mile road course. The track generates more than $301 million annually for the region.