It was a weekend full of thrills on the track, an amazing start to the 2019 Monster Energy NASCAR Cup Series with the 61st running of the Daytona 500 on February 17, 2019. Denny Hamlin won his second career Great American Race by avoiding a pile up that involved more than half the field with 10 laps to go. Even before the drivers started their engines, though, fans at Daytona International Speedway took the Busch NA Responsibility Has Its Rewards pledge – a promise to prevent drunk driving, promote traffic safety and encourage positive fan behavior.

From Thursday February 14 to Sunday February 17, 2019 Busch NA, Americrown and TEAM Coalition engaged with 2,575 fans over the four-day celebration of racing. All the participating fans autographed the responsibility wall, received a free souvenir photo and gave the Busch NA prize wheel a spin. And they all had a chance to be selected as the Responsible Fan for the Race. 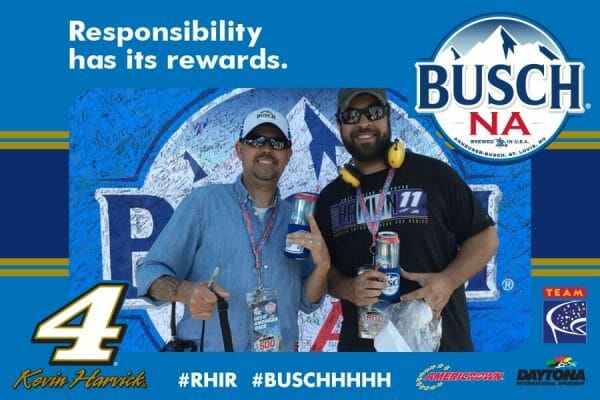 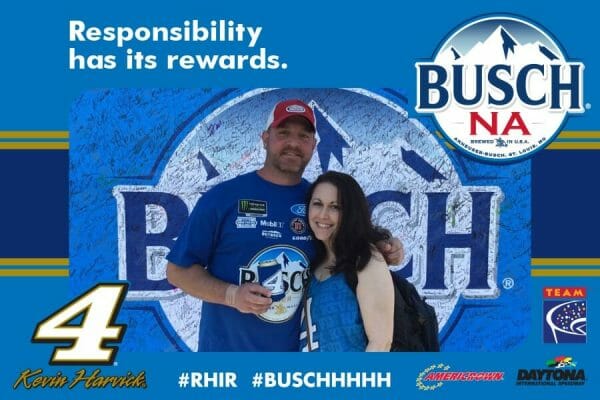 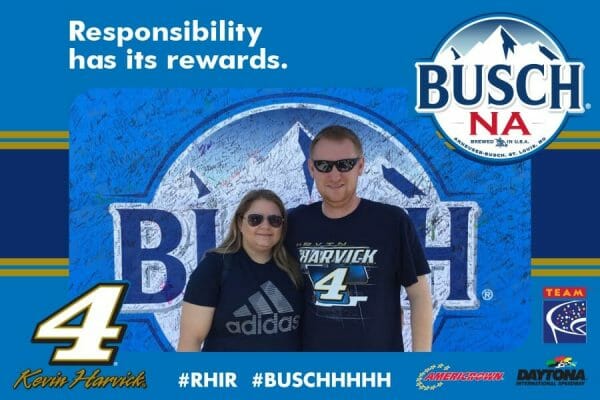 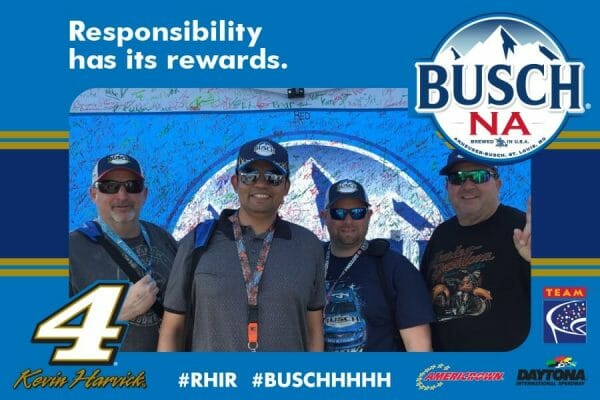 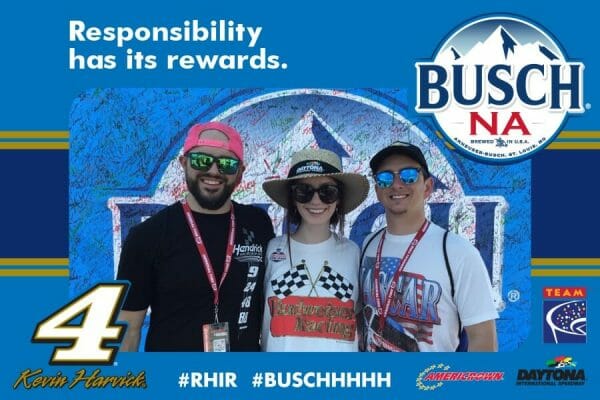 The 1,427 photos taken at Daytona International Speedway were viewed more than 3,200 times through forwarding texts and social media posts.

One randomly selected, responsible fan will win the Responsibility Has Its Rewards (RHIR) sweepstakes. The grand prize includes two tickets and a VIP experience for two at the Coke Zero 400 at Daytona International Speedway on Saturday July 6, 2019. Daytona launched both the 2019 Monster Energy NASCAR Cup Series and the web-based pledge component of the RHIR sweepstakes for responsible race fans. Between now and October 27, 2019, NASCAR fans who go online to make their pledge to prevent drunk driving are entered for a chance to win a trip to the 2019 Monster Energy NASCAR Cup Series championship race at Homestead-Miami Speedway or the 2020 Monster Energy NASCAR All-Star Race at Charlotte Motor Speedway. Click here to see complete sweepstakes rules.

Our colleagues take great pride in promoting responsible drinking, as we have done for more than 35 years. The Responsibility Has Its Rewards program is a great way to remind fans to both enjoy responsibly and have a safe ride plan. Our partnership with NASCAR, TEAM and the great fans at the Daytona 500 at Daytona International Speedway showcases our collective mission to help keep our roads safe.Adam Warrington, Vice President, Corporate Social Responsibility, Anheuser-Busch
Americrown believes responsible alcohol consumption improves the fan experience at events. As a proud member of the TEAM Coalition, we use proven training tools to educate our service staff as well as our partners in venue management.  Each day, we pledge to operate with the highest integrity for the benefit of all stakeholders.Michael Pappas, Vice President, Americrown
The success of the Responsibility Has Its Rewards campaign is a direct result of the commitment from our members and all the designated driver program partners, including the tracks, concessionaires, beer companies and beer distributors. Teamwork is what this campaign is all about. We are demonstrating that when everyone – including the fans – takes responsibility, everyone wins.Jill Pepper, Executive Director, TEAM Coalition
Daytona International Speedway
Daytona International Speedway is the home of “The Great American Race” – the DAYTONA 500. Though the season-opening NASCAR Sprint Cup event garners most of the attention – as well as the largest audience in motorsports – the approximately 500-acre motorsports complex boasts the most diverse schedule of racing on the globe, thus earning it the title of “World Center of Racing.” In addition to eight major weekends of racing activity, rarely a week goes by that the Speedway grounds are not used for events that include civic and social gatherings, car shows, photo shoots, production vehicle testing and police motorcycle training. For more information, visit www.DaytonaInternationalSpeedway.com.
Anheuser-Busch

For more than 165 years, Anheuser-Busch has been woven into the cultural fabric of the United States, carrying on a legacy of brewing great-tasting, high-quality beers that have satisfied beer drinkers for generations. Today, we own and operate 23 breweries, 29 distributorships and 23 agricultural and packaging facilities, and have more than 18,000 colleagues across the United States. We are home to several of America’s most recognizable beer brands, including Budweiser, Bud Light, Michelob ULTRA and Stella Artois, as well as a number of regional brands that provide beer drinkers with a choice of the best-tasting craft beers in the industry. From responsible drinking programs and emergency drinking water donations to industry-leading sustainability efforts, we are guided by our unwavering commitment to supporting the communities we call home. For more information, visit www.anheuserbusch.com or follow Anheuser-Busch on LinkedIn, Twitter, Facebook and Instagram.