The NHL® teamed with Coors Light (the official beer of the NHL) and TEAM Coalition to promote responsible drinking at the 2017 NHL Fan Fair™, 2017 Coors Light Skills Competition™ and the 2017 Honda NHL® All-Star Game in Los Angeles on January 26, 27, 28 and 29, 2017. While the NHL® All-Stars displayed their amazing skills on the ice, 1,449 NHL® fans scored a responsibility hat trick off the ice, making the pledge to never drive drunk, always have a designated driver, and never provide alcohol to anyone under 21.

Brian Fox, the Boston Bruins® Designated Driver for the Season, earned the grand prize of the Responsibility Has It Rewards sweepstakes by pledging to be a designated driver at a Bruins® home game at TD Garden during the 2015-2016 regular season. Fox’s pledge was selected from a random drawing. Fox and his guest received a trip to the 2017 NHL All-Star Weekend™ including airfare, hotel accommodations and tickets to the 2017 Honda NHL® All-Star Game.

At the 2017 NHL Fan Fair™ in the Los Angeles Convention Center, NHL® fans had the opportunity to add their names to the Responsibility Puck – an 8-foot replica of an official NHL® puck – to demonstrate their commitment to keeping the penalties on the ice and off the roads.  All the responsible fans received a souvenir photo and were entered for a chance to win an NHL® prize pack including a $50 Shop.NHL.com gift card and branded items from Coors Light and TEAM Coalition. 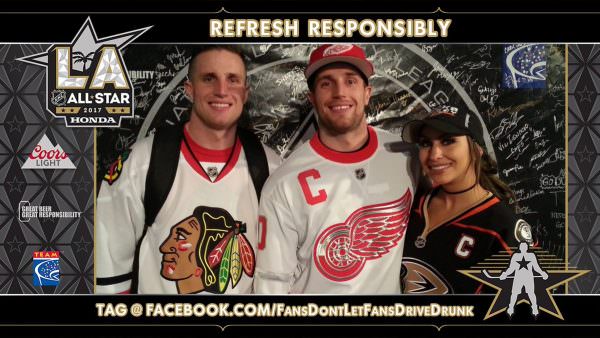 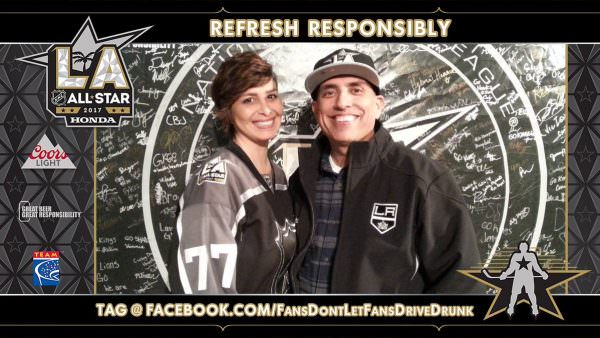 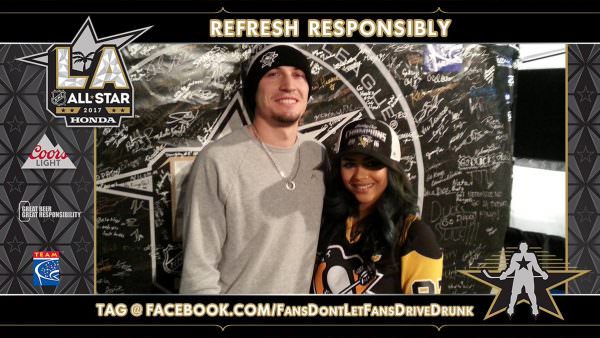 Thanks to the more than 111,000 NHL fans who pledged to be responsible last season and congratulations to Brian. We are thrilled that you have proven, once again, that responsibility really does have its rewards.

We believe that with great beer comes great responsibility, and we’re thrilled to partner with the NHL and TEAM Coalition to help promote responsibility at hockey events. For many legal drinking age fans, enjoying a beer at the game is part of the hockey experience, and we want to encourage fans to enjoy the game responsibly and plan ahead for a safe ride home.Diane Wagner, Responsibility Commerce Manager for MillerCoors
The success of the Responsibility Has Its Rewards campaign is a direct result of the commitment from our members and all the responsibility program partners, including the leagues, venues, brewers and beer distributors. Teamwork is what this campaign is all about. We are demonstrating that when everyone – including the fans – takes responsibility, everyone wins.Jill Pepper, Executive Director, TEAM Coalition
National Hockey League
The National Hockey League (NHL®), founded in 1917, will celebrate its Centennial anniversary in 2017. The year-long celebration will pay tribute to 100 years of NHL hockey by honoring the past, commemorating the present, and celebrating its future. In 2017 the League will also celebrate 125 years of the most revered trophy in professional sports – the Stanley Cup®. Comprised of 30 Member Clubs, the NHL is represented by players from more than 20 countries across team rosters. Each year, the NHL entertains hundreds of millions of fans around the world. The League broadcasts games in more than 160 countries and territories through its rightsholders including NBC/NBCSN in the U.S., Sportsnet and TVA in Canada, and Viasat in the Nordic Region. The NHL reaches fans worldwide with games available online in every country including via its live and on-demand streaming service NHL.TV™. Fans are engaged across the League’s digital assets on mobile devices via the free NHL® App; across nine social media platforms; on SiriusXM NHL Network Radio™, and on NHL.com, available in eight languages and featuring an enhanced statistics platform powered by SAP, providing the definitive destination for hockey analytics. The NHL is committed to giving back to the community through programs including: Hockey is for Everyone™ which supports nonprofit youth hockey organizations across North America; Hockey Fights Cancer™ which raises money and awareness for hockey’s most important fight; NHL Green™ which is committed to the pursuit of sustainable business practices; and a partnership with the You Can Play Project, which is committed to supporting the LGBT community and fighting homophobia in sports. For more information, visit NHL.com.
MillerCoors
Through its diverse collection of storied breweries, MillerCoors brings American beer drinkers an unmatched selection of the highest quality beers steeped in centuries of brewing heritage. Miller Brewing Company and Coors Brewing Company offer domestic favorites such as Coors Light, Miller Lite, Miller High Life and Coors Banquet, as well as innovative new products such as Miller Fortune. Tenth and Blake Beer Company, our craft and import division, offers beers such as Leinenkugel’s Summer Shandy from sixth-generation Jacob Leinenkugel Brewing Company and Blue Moon Belgian White from modern craft pioneer Blue Moon Brewing Company. Tenth and Blake also operates Crispin Cidery, an artisanal maker of pear and apple ciders using 100 percent fresh-pressed American juice. The company imports world-renowned beers such as Italy’s Peroni, the Czech Republic’s Pilsner Urquell and the Netherlands’ Grolsch. MillerCoors also offers pioneering new brands such as Redd’s Apple Ale, Batch 19 Pre-Prohibition Lager, Third Shift Amber Ale and Smith & Forge Hard Cider. MillerCoors seeks to become America’s best beer company through an uncompromising promise of quality, a keen focus on innovation and a deep commitment to sustainability. MillerCoors is a joint venture of SABMiller plc and Molson Coors Brewing Company. Learn more at www.MillerCoors.com , at www.facebook.com/MillerCoors  or on Twitter through @MillerCoors.
TEAM Coalition
TEAM Coalition is an alliance of professional and collegiate sports, entertainment facilities, concessionaires, stadium service providers, the beer industry, distillers, broadcasters, traffic safety experts and others working together to promote responsible drinking and positive fan behavior at sports and entertainment facilities. TEAM Coalition members and supporters include Major League Soccer, HEINEKEN USA, Spectra, Major League Baseball, NASCAR, National Basketball Association, National Football League, National Hockey League, National Collegiate Athletic Association, Americrown, Aramark, Delaware North Sportservice, Legends, Beer Institute, National Beer Wholesalers Association, Anheuser-Busch Companies, Constellation Brands, MillerCoors, Brown-Forman, Live Nation, National Association of Broadcasters, Contemporary Services Corporation, International Association of Venue Managers, Stadium Managers Association and the National Highway Traffic Safety Administration. For more information visit www.TEAMCoalition.org or www.FansDontLetFansDriveDrunk.org.