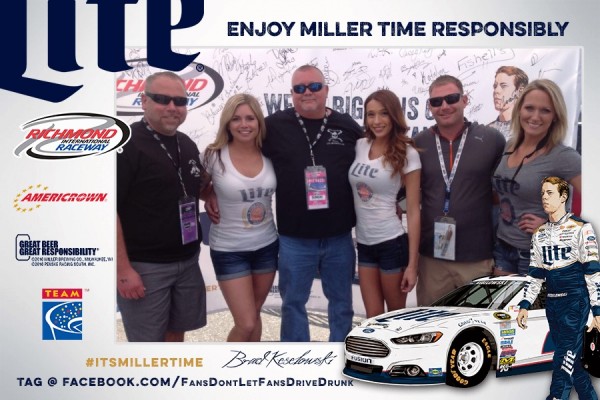 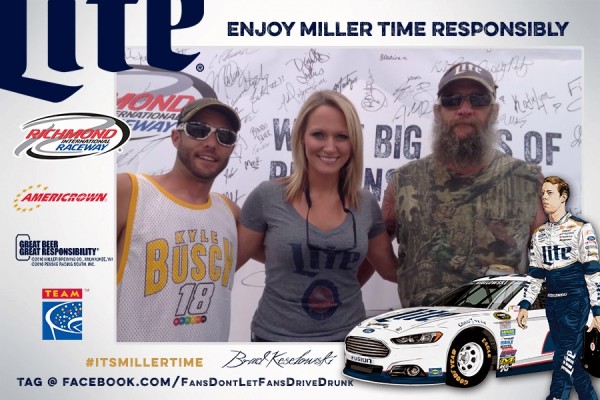 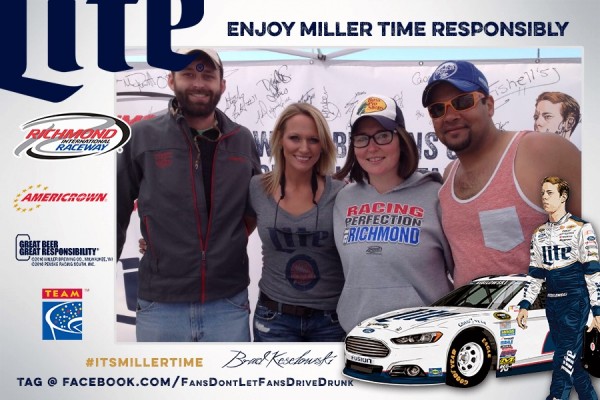 82 fans made the pledge to be a designated driver for their group. Fans who pledged received a free souvenir photo, instant prizes and a chance to be selected as the Designated Driver for the Race. One randomly selected, responsible fan will win the Responsibility Has Its Rewards sweepstakes. The grand prize includes tickets and a VIP experience for two people at the Federated Auto Parts 400 on September 10, 2016 at Richmond International Raceway.

The Designated Driver for the Race from the Federated Auto Parts 400 last September, Lisa Cruz, received a pair of tickets and a behind-the-scenes experience before the Toyota Owners 400. She and her guest also met Brad Keselowski, driver of the No. 2 Miller Lite car, before the race.

We applaud those who signed the pledge to be a designated driver for their group during race weekend. It’s important for everyone to be responsible when choosing to consume alcohol while enjoying the race weekend at RIR.Dennis Bickmeier, President, Richmond International Raceway
We believe that with great beer comes great responsibility, and we’re thrilled to partner with NASCAR, Richmond International Raceway and TEAM Coalition to help promote responsibility at the track. For many legal drinking age fans, enjoying a beer on race day is part of the NASCAR experience, and we want to encourage fans to enjoy the race responsibly and plan ahead for a safe ride home from the track.Diane Wagner, Responsibility Commerce Manager, MillerCoors
Americrown believes responsible alcohol consumption improves the fan experience at events. As a proud member of the TEAM Coalition, we use proven training tools to educate our service staff as well as our partners in venue management.  Each day, we pledge to operate with the highest integrity for the benefit of all stakeholders.Rishi Nigam, Vice President, Americrown
The success of the Responsibility Has Its Rewards campaign is a direct result of the commitment from our members and all the designated-driver program partners, including the tracks, beer companies and state offices of highway safety. Teamwork is what this campaign is all about. We are demonstrating that when everyone – including the fans – takes responsibility, everyone wins.Jill Pepper, Executive Director, TEAM Coalition
Richmond International Raceway
Richmond International Raceway, known as America’s Premier Short Track, offers exciting night racing action and a commitment to the fan experience. One of the most popular facilities among drivers and fans in all of motorsports, Richmond International Raceway annually hosts all of its major events—two NASCAR Sprint Cup Series races, two NASCAR Nationwide Series events and one NASCAR K&N Pro Series East race—under the lights on its ¾-mile D-Shaped oval. The unique layout consistently produces the thrill of side-by-side racing, coupled with high enough speeds for a superspeedway feel. Combined with first-class amenities (including the state-of-the-art Video Scoring Tower) and a focus on the fans, guests at Richmond International Raceway can expect lasting memories on each visit. For tickets to events at Richmond International Raceway, call 866-455-7223 or visit www.rir.com online. Like us on Facebook and follow us on Twitter @RIRInsider.
MillerCoors
Through its diverse collection of storied breweries, MillerCoors brings American beer drinkers an unmatched selection of the highest quality beers, flavored malt beverages and ciders, steeped in centuries of brewing heritage. Miller Brewing Company and Coors Brewing Company offer domestic favorites such as Coors Light, Coors Banquet, Miller Lite and Miller High Life. Tenth and Blake Beer Company, our craft and import division, offers beers such as Leinenkugel’s Summer Shandy from sixth-generation Jacob Leinenkugel Brewing Company, and Blue Moon Belgian White from modern craft pioneer Blue Moon Brewing Company, founded in 1995. Tenth and Blake also imports world-renowned beers such as Italy’s Peroni Nastro Azzurro, the Czech Republic’s Pilsner Urquell and the Netherlands’ Grolsch. MillerCoors also operates Crispin Cider Company, an artisanal maker of pear and apple ciders using fresh-pressed American juice, and offers pioneering new brands such as the Redd’s Apple and Redd’s Wicked Apple franchises, Smith & Forge Hard Cider and Henry’s Hard Sodas. MillerCoors seeks to become America’s best beer company through an uncompromising promise of quality, a keen focus on innovation and a deep commitment to sustainability. MillerCoors is a joint venture of SABMiller plc and Molson Coors Brewing Company. Learn more at www.MillerCoors.com , at facebook.com/MillerCoors or on Twitter through @MillerCoors.
Americrown
Americrown, originally formed in 1989 by Lesa France Kennedy, Chief Executive Officer of International Speedway Corporation, is the leader in motorsports catering and concessions. Operating at 11 NASCAR-sanctioned tracks nationwide, Americrown touches millions of race fans annually. Our ever growing fleet of mobile food concessions and catering equipment is unparalleled in the industry. Anywhere, anytime. If you can dream it, we can do it!