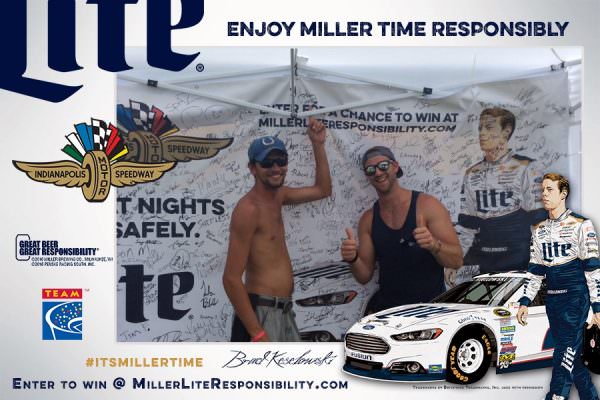 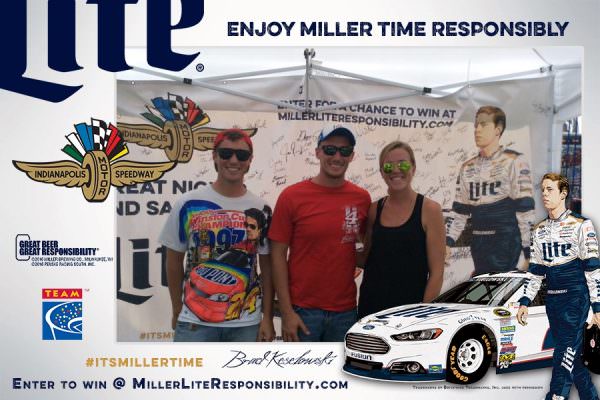 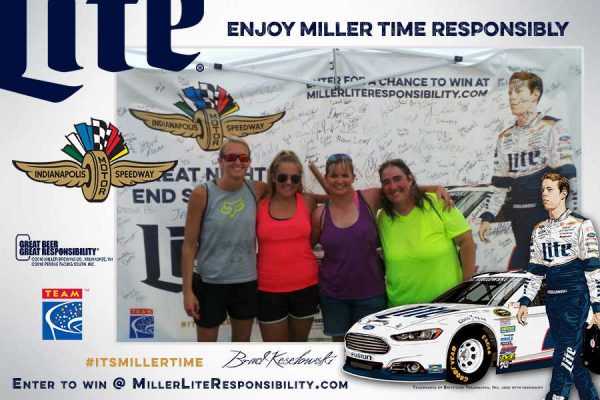 262 fans made the pledge to always buckle up and to be a designated driver for their group. Fans who pledged received a free souvenir photo, instant prizes and a chance to be selected as the Designated Driver for the Race. One randomly selected, responsible fan will win the Responsibility Has Its Rewards sweepstakes. The grand prize includes two tickets and two VIP experiences to the next NASCAR Sprint Cup Series race at Indianapolis Motor Speedway. Every fan who received a photo was also directed to MillerLiteResponsibility.com to enter for a chance to win a 2016 Ford Fusion SE.

The Designated Driver for the Race from the July 2015 Crown Royal 400 at INDY, Bob Glick, received two tickets and two VIP Experiences to this year’s Crown Royal 400. Bob and his guest enjoyed a behind-the-scenes experience before the race on Sunday.

We thank those race fans who signed the pledge to be a designated driver for their group during race weekend at the Indianapolis Motor Speedway. It’s important to be responsible when choosing to consume alcohol, and a designated driver helps ensure safe travels home after a great day at the racetrack.J. Douglas Boles, President, Indianapolis Motor Speedway
We believe that with great beer comes great responsibility and we’re thrilled to partner with NASCAR, New Hampshire Motor Speedway and TEAM Coalition to help promote responsibility at the track. For many fans, enjoying a beer on race day is part of the NASCAR experience, and we want to encourage fans to enjoy the race responsibly and plan ahead for a safe ride home from the track.Diane Wagner, Responsibility Commerce Manager, MillerCoors
The success of the Responsibility Has Its Rewards campaign is a direct result of the commitment from our members and all the designated-driver program partners, including the tracks, beer companies and state offices of highway safety. Teamwork is what this campaign is all about. We are demonstrating that when everyone – including the fans – takes responsibility, everyone wins.Jill Pepper, Executive Director, TEAM Coalition
Indianapolis Motor Speedway

The Indianapolis Motor Speedway has been the worldwide leader in motorsports entertainment since it opened in 1909. The facility has hosted the Indianapolis 500, the world’s largest single-day annual sporting event, since 1911 and also is the site of the Kroger Super Weekend at the Brickyard and the Red Bull Indianapolis GP. IMS is the world’s largest spectator sporting facility and is the only venue to stage annual races in the IZOD IndyCar Series, NASCAR Sprint Cup Series, NASCAR Xfinity Series, GRAND-AM Road Racing and MotoGP.