The Monster Energy NASCAR Cup Series™ made its way to Arizona for the Can-Am 500 at Phoenix Raceway on November 12, 2017. Before the green flag waved, 112 fans at the track took the opportunity to earn valuable rewards by taking a responsibility pledge to prevent drunk driving. The race marks the sixth race that TEAM has promoted responsibility with the track and NASCAR.

The responsibility pledge is a promise to not drink alcohol at the event and serve as the designated driver for their group. All of the fans who participated autographed the responsibility wall, received a free souvenir photo and instant prizes, and entered for a chance to be selected as the Designated Driver for the Race. One randomly selected, responsible fan will win the “Responsibility Has Its Rewards sweepstakes.” The grand prize includes two tickets and a VIP experience for two at the spring race at Phoenix Raceway on March 11, 2018. 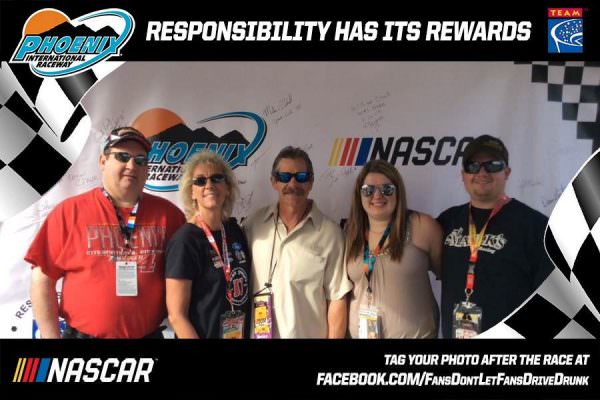 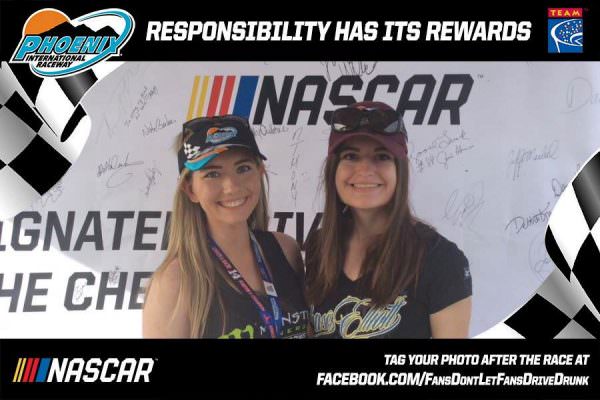 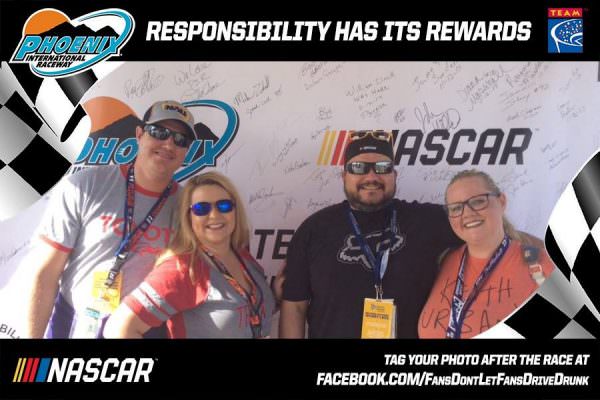 The Designated Driver for the Race from the 2016 Camping World 500, Jackie O’Donnell, received a pair of tickets and a behind-the-scenes experience for herself and her guest before the Can-Am 500.

The success of the Responsibility Has Its Rewards campaign is a direct result of the commitment from our members and all the designated driver program partners, including the tracks, concessionaires, beer companies and beer distributors. Teamwork is what this campaign is all about. We are demonstrating that when everyone – including the fans – takes responsibility, everyone wins.Jill Pepper, Executive Director, TEAM Coalition
Phoenix International Raceway
Since 1964, Phoenix International Raceway has been the premier motorsports venue in the Southwest. Founded as an open-wheel racing mecca, PIR was proud to host the Desert Diamond West Valley Phoenix Grand Prix Verizon IndyCar Series race under the lights in April. Phoenix is the only track in the West to feature two NASCAR Sprint Cup Series weekends a year, beginning with the Good Sam 500 race weekend in March. The schedule is anchored by the upcoming Can-Am 500 race weekend on Nov. 11-13, the semifinal race in the Chase for the NASCAR Sprint Cup after which the field will be reduced to the final four championship contenders.
TEAM Coalition
TEAM Coalition is an alliance of professional and collegiate sports, entertainment facilities, concessionaires, stadium service providers, the beer industry, distillers, broadcasters, traffic safety experts and others working together to promote responsible drinking and positive fan behavior at sports and entertainment facilities. TEAM Coalition members and supporters include NASCAR, Anheuser-Busch Companies, Americrown, Major League Baseball, Major League Soccer, National Basketball Association, National Football League, National Hockey League, National Collegiate Athletic Association, Aramark, Delaware North Sportservice, Legends, Spectra, Beer Institute, National Beer Wholesalers Association, Constellation Brands, HEINEKEN USA, MillerCoors, Brown-Forman, Live Nation, National Association of Broadcasters, Contemporary Services Corporation, International Association of Venue Managers, Stadium Managers Association and the National Highway Traffic Safety Administration. For more information visit TEAMCoalition.org.