Fans at New Hampshire Motor Speedway had a lot to celebrate on July 16, 2017, from Richard Petty’s 80th birthday to a thrilling running of the Overton’s 301. And for the sixth consecutive year, fans who pledged to partake in those celebrations responsibly were rewarded through a partnership between the track, Miller Lite and TEAM Coalition. 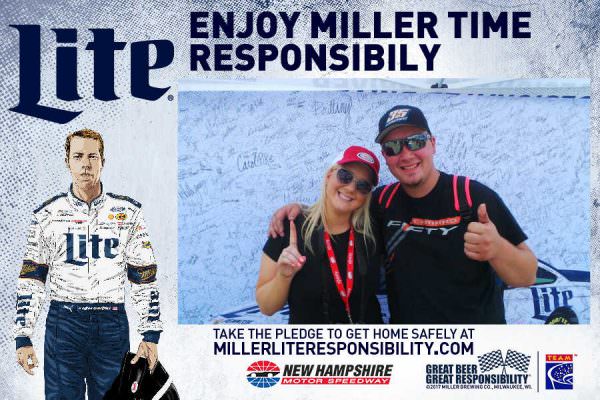 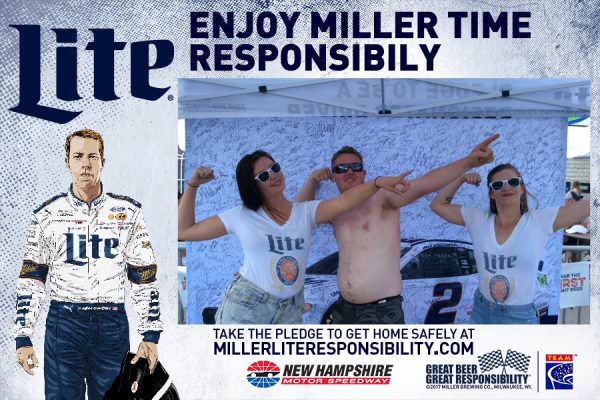 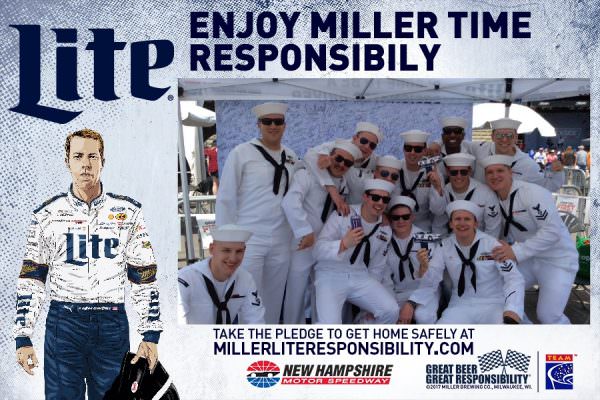 Before the race, 492 fans made the pledge to be a designated driver for their group. All of them had the opportunity to receive a free souvenir photo, instant prizes and a chance to be selected as the Designated Driver of the Race. New for this race, fans received a photo prop featuring Brad Keselowski’s #2 Ford. Fans were encouraged to use the prop in race day photos and post those photos on social media to spread the responsibility word.

One randomly selected, responsible fan will win the Responsibility Has Its Rewards sweepstakes. The grand prize includes two tickets and two VIP experiences to the ISM 300 at New Hampshire Motor Speedway in September.

The Designated Driver for the Race from last September, Shawn Young, received two tickets and two VIP Experiences to the Overton’s 301. Young and his guest enjoyed a behind-the-scenes tour before the race on Sunday.

While we want everyone that steps onto our property to have the best time they can possibly have, there’s nothing more important to us than the safety of our fans. Signing this pledge to be a designated driver speaks to the character of our fan base.David McGrath, General Manager, New Hampshire Motor Speedway
We believe that with great beer comes great responsibility, and we’re thrilled to partner with NASCAR, New Hampshire Motor Speedway and TEAM Coalition to help promote responsibility at the track. For many legal drinking age fans, enjoying a beer on race day is part of the NASCAR experience, and we want to encourage fans to enjoy the race responsibly and plan ahead for a safe ride home from the track.Diane Wagner, Responsibility Commerce Manager, MillerCoors
The success of the Responsibility Has Its Rewards campaign is a direct result of the commitment from our members and all the designated-driver program partners, including the tracks, beer companies and state offices of highway safety. Teamwork is what this campaign is all about. We are demonstrating that when everyone – including the fans – takes responsibility, everyone wins.Jill Pepper, Executive Director, TEAM Coalition
MillerCoors
Through its diverse collection of storied breweries, MillerCoors brings American beer drinkers an unmatched selection of the highest quality beers, flavored malt beverages and ciders, steeped in centuries of brewing heritage. Miller Brewing Company and Coors Brewing Company offer domestic favorites such as Coors Light, Coors Banquet, Miller Lite and Miller High Life. Tenth and Blake Beer Company, our craft and import division, offers beers such as Leinenkugel’s Summer Shandy from sixth-generation Jacob Leinenkugel Brewing Company, and Blue Moon Belgian White from modern craft pioneer Blue Moon Brewing Company, founded in 1995. Tenth and Blake also imports world-renowned beers such as Italy’s Peroni Nastro Azzurro, the Czech Republic’s Pilsner Urquell and the Netherlands’ Grolsch. MillerCoors also operates Crispin Cider Company, an artisanal maker of pear and apple ciders using fresh-pressed American juice, and offers pioneering new brands such as the Redd’s Apple and Redd’s Wicked Apple franchises, Smith & Forge Hard Cider and Henry’s Hard Sodas. MillerCoors seeks to become America’s best beer company through an uncompromising promise of quality, a keen focus on innovation and a deep commitment to sustainability. MillerCoors is a joint venture of SABMiller plc and Molson Coors Brewing Company. Learn more at www.MillerCoors.com , at facebook.com/MillerCoors or on Twitter through @MillerCoors.
TEAM Coalition
TEAM Coalition is an alliance of professional and collegiate sports, entertainment facilities, concessionaires, stadium service providers, the beer industry, distillers, broadcasters, traffic safety experts and others working together to promote responsible drinking and positive fan behavior at sports and entertainment facilities. TEAM Coalition members and supporters include NASCAR, MillerCoors, Americrown, Major League Baseball, Major League Soccer, National Basketball Association, National Football League, National Hockey League, National Collegiate Athletic Association, Aramark, Delaware North Sportservice, Legends, Spectra, Beer Institute, National Beer Wholesalers Association, Anheuser-Busch Companies, Constellation Brands, HEINEKEN USA, Brown-Forman, Live Nation, National Association of Broadcasters, Contemporary Services Corporation, International Association of Venue Managers, Stadium Managers Association and the National Highway Traffic Safety Administration. For more information visit TEAMCoalition.org or FansDontLetFansDriveDrunk.org.