The Chase for the Sprint Cup’s Round of 8 got off to a roaring start at the Goody’s Fast Relief 500 at Martinsville Speedway on October 30, 2016. Off the track, fans had the opportunity to earn valuable rewards by making the pledge to never drive drunk and get their friends and family home safely. The race marks the second time the track, Americrown and TEAM Coalition have partnered to promote responsible drinking and traffic safety. 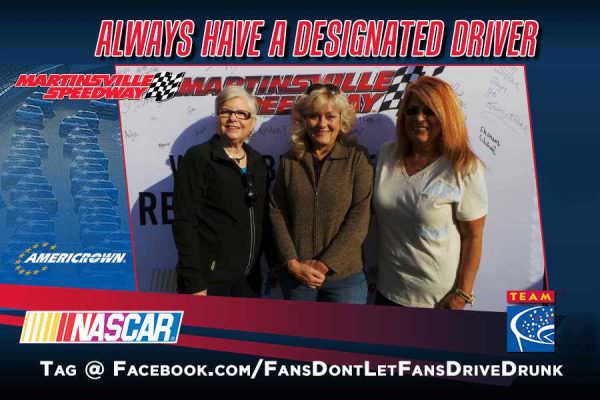 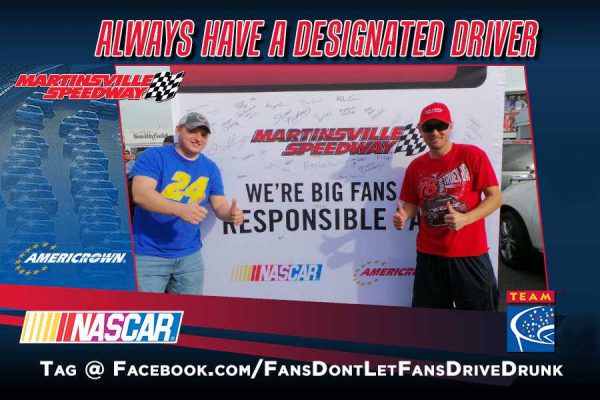 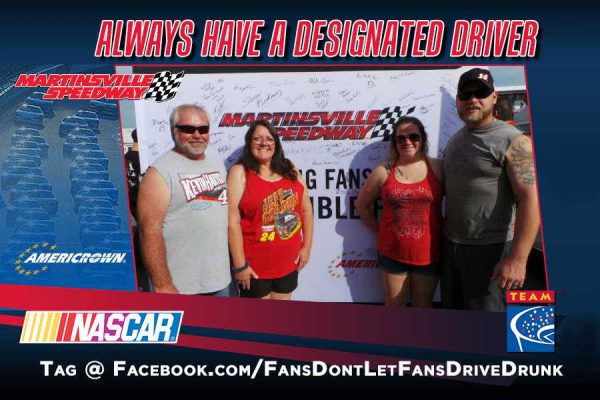 Before drivers took on the Half Mile of Mayhem, 161 fans made the pledge to be the designated driver for their group. All of them had the opportunity to receive a free souvenir photo, instant prizes, and a chance to be selected as the Designated Driver for the Race. One randomly selected, responsible fan will win the “Responsibility Has Its Rewards sweepstakes.” The grand prize includes two tickets and a VIP experience for two at the STP 500 at Martinsville Speedway on April 2, 2017.

The Designated Driver for the Race from the 2016 STP 500, Brandon Mitchell, received two tickets and two VIP Experiences at the Goody’s Fast Relief 500. Mitchell and his guest also enjoyed a behind-the-scenes experience before the green flag on Sunday.

While we want every fan that comes to Martinsville Speedway to enjoy everything about their race experience as much as possible, safety is always the top priority. With that in mind, we commend the fans that chose to serve as designated drivers for their family or friends during race weekend.Clay Campbell, President, Martinsville Speedway
Americrown believes responsible alcohol consumption improves the fan experience at events. As a proud member of the TEAM Coalition, we use proven training tools to educate our service staff as well as our partners in venue management.  Each day, we pledge to operate with the highest integrity for the benefit of all stakeholders.Rishi Nigam, Vice President, Americrown
The success of the Responsibility Has Its Rewards campaign is a direct result of the commitment from our members and all the designated driver program partners, including the tracks, concessionaires, beer companies and beer distributors. Teamwork is what this campaign is all about. We are demonstrating that when everyone – including the fans – takes responsibility, everyone wins.Jill Pepper, Executive Director, TEAM Coalition
Martinsville Speedway
Founded in 1947 by the late H. Clay Earles, Martinsville Speedway is only track which has hosted NASCAR Sprint Cup Series races every year since the division’s inception in 1949. The track is also one of the most modern, with high-rise aluminum chair back seating, corporate and fan suites and state-of-the-art facilities for the media. In a recent poll of race fans by a major publication, Martinsville Speedway was voted as the top bargain in all of Sprint Cup racing as well as the track having the best view of the action. Martinsville Speedway conducts three major race event weekends each year. The track annually hosts the STP 500 and the Goody’s® Fast Relief 500 NASCAR Sprint Cup Series™ races, the Kroger 250 and Kroger 200 NASCAR Camping World Truck Series races and the nation’s biggest NASCAR Late Model Stock Car race.
Americrown
Americrown, originally formed in 1989 by Lesa France Kennedy, Chief Executive Officer of International Speedway Corporation, is the leader in motorsports catering and concessions. Operating at 11 NASCAR-sanctioned tracks nationwide, Americrown touches millions of race fans annually. Our ever growing fleet of mobile food concessions and catering equipment is unparalleled in the industry. Anywhere, anytime. If you can dream it, we can do it!