The Chase for the Sprint Cup™ continued at Kansas Speedway on October 16, 2016, and before the green flag waved, fans at the Hollywood Casino 400 planned their own winning strategy by taking the pledge to get home safely. The track, Americrown and TEAM Coalition partnered to promote responsible drinking and traffic safety. 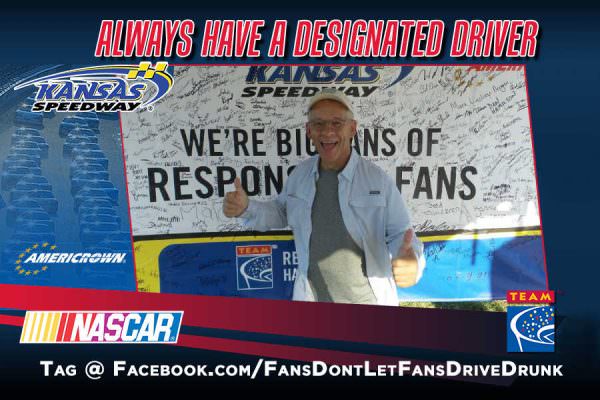 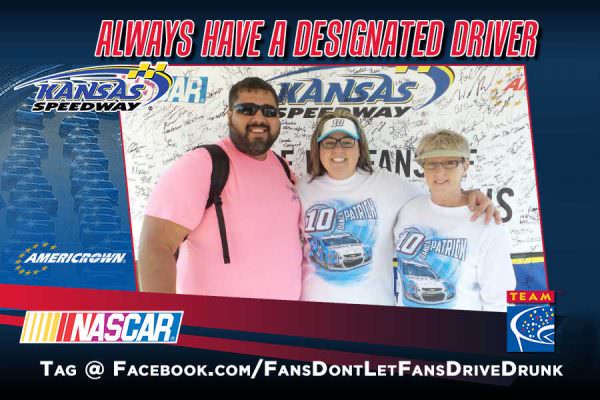 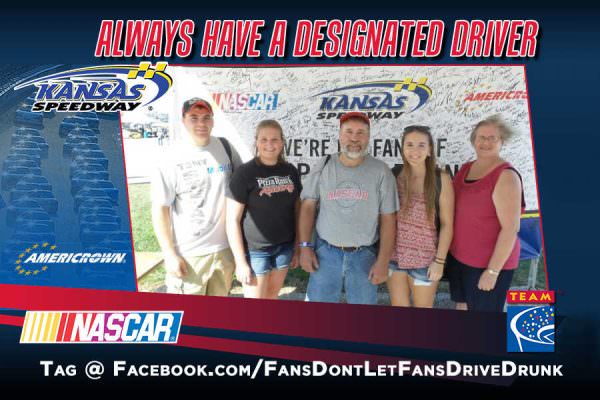 Before the race, 210 fans made the pledge to be the designated driver for their group. All of them had the opportunity to receive a free souvenir photo, instant prizes, and a chance to be selected as the Designated Driver for the Race. One randomly selected, responsible fan will win the “Responsibility Has Its Rewards sweepstakes.” The grand prize includes two tickets and a VIP experience for two at the Go Bowling 400 at Kansas Speedway on May 13, 2017.

The Designated Driver for the Race from the 2016 Go Bowling 400, Steve Shaunce, received a pair of tickets and a behind-the-scenes experience before the Hollywood Casino 400.

While we want every fan that comes to Kansas Speedway to enjoy everything about their race experience as much as possible, safety is always the top priority. With that in mind, we commend the fans that chose to serve as designated drivers for their family or friends during race weekend.Patrick Warren, President, Kansas Speedway
Americrown believes responsible alcohol consumption improves the fan experience at events. As a proud member of the TEAM Coalition, we use proven training tools to educate our service staff as well as our partners in venue management.  Each day, we pledge to operate with the highest integrity for the benefit of all stakeholders.Rishi Nigam, Vice President, Americrown
The success of the Responsibility Has Its Rewards campaign is a direct result of the commitment from our members and all the designated driver program partners, including the tracks, concessionaires, beer companies and beer distributors. Teamwork is what this campaign is all about. We are demonstrating that when everyone – including the fans – takes responsibility, everyone wins.Jill Pepper, Executive Director, TEAM Coalition
Kansas Speedway
Kansas Speedway 1.5 mile tri-oval suitable for all types of racing. A road course was added in the summer of 2012 that winds through the infield. Tickets for Kansas Speedway’s 2017 events are currently on sale by calling 866.460.7223. Kansas Speedway will host the Go Bowling 400 NASCAR Cup Series race on May 13 and the NASCAR Camping World Truck Series race on May 12. The 2017 Chase for the NASCAR Cup Series returns with the Hollywood Casino 400 on Oct. 22. The Kansas Lottery 300 NASCAR XFINITY Series race will take center stage on Oct. 21. Parking is always free at Kansas Speedway, and fans can bring in one 14x14x14-inch soft-sided cooler with their favorite food and beverages. Fans can follow Kansas Speedway on Facebook at www.facebook.com/kansasspeedway or follow us on Twitter (@kansasspeedway).
Americrown
Americrown, originally formed in 1989 by Lesa France Kennedy, Chief Executive Officer of International Speedway Corporation, is the leader in motorsports catering and concessions. Operating at 11 NASCAR-sanctioned tracks nationwide, Americrown touches millions of race fans annually. Our ever growing fleet of mobile food concessions and catering equipment is unparalleled in the industry. Anywhere, anytime. If you can dream it, we can do it!